9 Fireball Jello Shots Everyone Will Love!

Before you start making jello shots, it’s important to have the right supplies on hand. To make jello shots, you’ll need the following:

When a recipe calls for boiling or hot water, be sure to stir in the jello mixture until completely dissolved. If this step is messed up, your shots won’t turn out to be a consistent flavor or texture.

Jello shots are a party favorite, but they shouldn’t be underestimated. Remember to pace yourself and hydrate with water between shots so you can keep partying until the night ends. When you start searching for a Fireball jello shots recipe, you’ll quickly notice most of the recipes are cherry-flavored Jello. Cherry jello pairs flawlessly with Fireball Whiskey for an inviting flavor everyone will love. While there are a lot of other Fireball cherry jello shot recipes, this one is special for two reasons.

First, it uses apple juice (they recommend Juicy Juice brand) alongside the Fireball and boiling water to mix the Jello. The addition of apple juice creates slightly sweeter shots.

Second, this cherry jello shots recipe calls for whipped cream and cinnamon red hots candy on top. The addition of cinnamon candies to the shot cups before they’re served not only looks cute, it amps up the heat in a fun way too!

Taste the flavors of fall with this apple cider Fireball jello shot. The jello mixture is made using unflavored gelatin, so the fiery cinnamon taste and strong apple cider flavors really shine.

Once the Fireball jello shot mixture has had time to firm up in plastic jello shot cups, top it with whipped cream and a fresh green apple slice.

The shots can be left in the fridge for up to a week before serving, but the garnishments shouldn’t be added until you’re ready to serve jello shots.

There’s no need for wasteful plastic cups, and you can pour the jello mix directly into your apples!

Cloudy jello shots are often seen when you use cider or fresh pressed juice, while regular apple juice and pucker are clear.

Use regular apple juice for a standard jello shot or apple pucker if you want something a bit stronger than other Jello shot recipes.

Spice up your holiday part with Holly Jolly Fireball shots that taste delicious with a spicy kick on top! To make these shots, gather plastic shot glasses or condiment cups. Boiling water, a packet of cherry jello, and Fireball are combined in a large liquid measuring cup before pouring the mixture into your plastic shot cups.

Top each shot with a scoop of whipped topping and a sprinkle of Red Hot candies. If you can find some green Christmas sprinkles to add on top, too, that’s even better!

Mulled wine is especially popular during the Christmas season, and it turns out Fireball whiskey is a great addition. To make these Fireball jello shots, begin by lining a medium-sized sheet tray with one-ounce plastic shot glasses. By preparing the area ahead of time, making your shots will go much quicker.

For the shots, you’ll need red wine, Fireball whiskey, raspberry jello, orange juice, water, cinnamon, cloves, and star anise. Add a fresh cranberry to each of the shot cups, and these natural party starters will be ready for all your upcoming Christmas parties.

The jello shot cups are topped with whipped cream and ground cinnamon for even more cinnamon flavor.

If you want even more cinnamon flavor, add a Halloween-size pack of red hot candy on the side.

Once the first layer is chilled, add a few drops of black food coloring gel to the rest of the mixture and pour gently on top. The result is a red and black vampire kiss jello shot of your nightmares!

Can you make jello shots with Fireball?

How strong is Fireball?

Fireball is comparable to other flavored whiskeys, with 33% ABV.

How many calories are in a serving of Fireball?

One nutrition serving of Fireball Cinnamon Whiskey, which is labeled as one shot, has 108 calories.

What flavors of Jello go best with Fireball?

Cherry and orange are the most popular jello flavors to mix with Fireball.

Where can you buy Fireball?

Order Fireball online and find retail locations near you with Drizly. 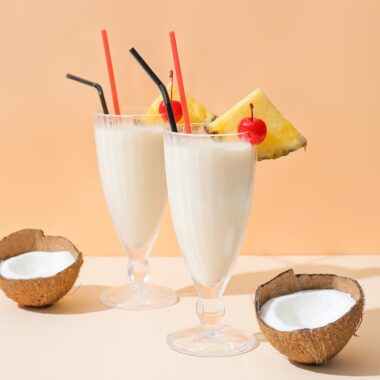 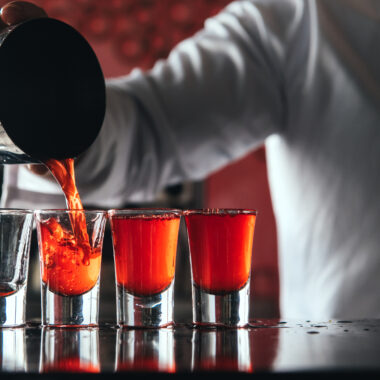 10 of the Best Fireball Shots