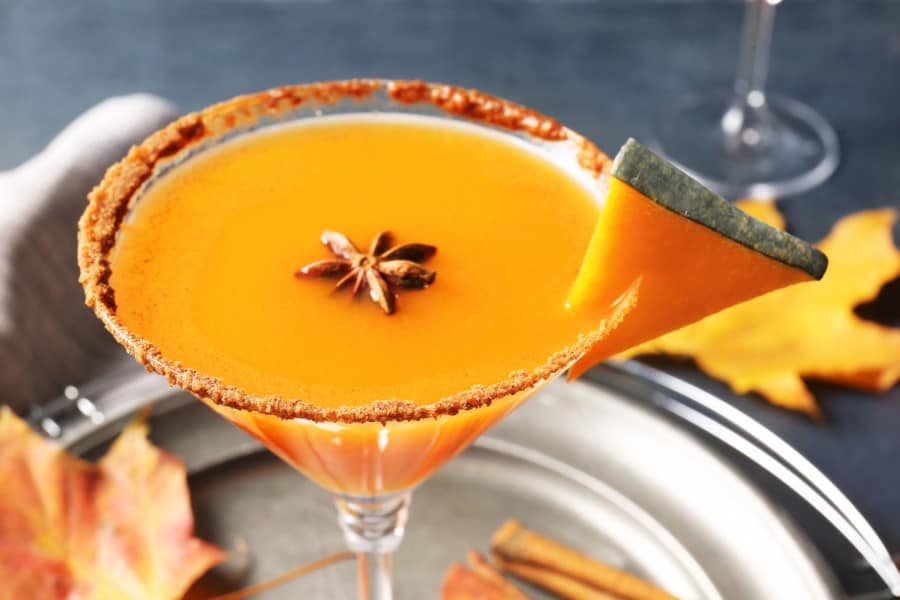 What reminds you of the fall? For us, it’s all about orange leaves, bonfires, football, sweaters, and our favorite autumn cocktails like mulled wine and martinis that highlight every flavor of the season. We collected thirteen fantastic martinis to enjoy this fall.

It starts with making your own cardamom-infused simple syrup and adding that to pomegranate juice, pomegranate flavored vodka, and lemon juice in a cocktail shaker filled with ice. Shake well and pour into a prepared martini glass. You could substitute cranberry juice for the pomegranate and get an equally wonderful cocktail. A spiced sugar rim is a perfect accompaniment to this cocktail.

To us, this is just about as perfect as it gets for a fall martini. With apple and pumpkin taking center stage, pear often gets overlooked, but this martini puts the flavor of pear at center stage.

This martini is a bit involved because you have to make your spice-infused vodka, but the flavors are amazing! Infuse vodka with fresh pears, star anise, cinnamon sticks, vanilla bean, and cloves. You need to get started on this at least several days before you want to serve these cocktails, but they are pure fall vodka martini perfection!

One sip of the Cinnamon Pear Martini, and you’re going to be reminded of the beautiful flavors of the season. Vodka and pear nectar serves as the base, and then they’re enhanced by cinnamon, star anise, and Angostura bitters.

Shake together all ingredients in a cocktail shaker and pour them into your favorite martini glass. Enjoy these cocktails garnished with a slice of pear.

If you want something a little different to enjoy and serve at your next fall gathering, these Bitter Orange and Cardamom Martinis have an unexpected twist. They’re made using orange marmalade and crushed cardamom pods that are simmered over very, very low heat with vodka, orange liqueur, and lemon juice. Then, the cocktail mixture is chilled until you’re ready to serve.

These fall cocktails have a taste that’s unlike anything else on this list, and they’re a wonderfully refreshing break away from the typical fall drinks.

by Doc Simonson Via AllRecipes

Autumn citrus flavors differ from those we enjoy during the spring and summer. With autumn comes more orange flavors with a hint of spice. This cocktail highlights the seasonal citrus notes just perfectly.

A nice, warm bourbon sets the stage and is complimented by maple syrup, Grand Marnier, clementine juice, and lemon juice. It’s not included in the recipe, but we added just a couple of dashes of orange bitters to bring out and enhance all the flavors.

The Bonefish Grill is infamous for its specialty martinis, many of which have dozens of copycat versions floating around online. Since it’s fall, we figure it’s appropriate to give the nod to their much-loved apple martini.

The deliciousness all starts with a honey apple infusion that features juicy apples, honey, water, and loads of cinnamon. To make the actual cocktail, combine the infusion with the vodka of your choice, ginger liqueur, and apple juice or apple cider. Fill your glass and says cheers to the season!

by The Slow Roasted Italian

If your idea of the perfect autumn cocktail involves warm, sweet flavors combined into a lusciously creamy drink, then this Caramel Apple Pie martini is about to become your new favorite.

Combine butterscotch schnapps, apple schnapps, Kahlua coffee liqueur, and French vanilla coffee in a cocktail shaker with ice. We like to rim our martini glasses with a bit of salted caramel syrup before pouring in the cocktail.

This recipe for a Gin, Apple Cider & Ginger Beer cocktail isn’t technically a martini, but we can just envision sipping this from a martini glass that’s garnished with apple slices. If martini glasses aren’t your thing, this would also be fun to serve in a copper mug.

Instead of your standard vodka martini, this recipe uses gin, apple cider or juice, high-quality ginger beer, and lemon juice. However, substituting lime juice would be good also. These are all the flavors we love wrapped up into one perfect seasonal cocktail.

This season brings to mind trips to the apple orchard and freshly baked apple pies. This autumn apple cider martini embodies all of this, and it’s just boozy enough to keep you warm on a chilly autumn night.

To make this apple-y goodness in a glass, you need vodka, ginger liqueur, apple cider, and cinnamon syrup. Enjoys these seasonal flavors served either warm or chilled.

by A Lush Life Manual

We love all the flavored coffee drinks of the season, but we’re willing to put our coffee cup to the side in favor of this spiced espresso martini. This drink doesn’t feature vodka but instead uses scotch whisky. If you’re not a fan of scotch and want a different flavor, a nice rich bourbon would work well too.

The spice in this drink recipe comes from spiced chai tea flavored syrup that’s balanced with the sweetness of coffee liqueur, and then a single shot of coffee to this cocktail a jolt.

Chocolate is wonderful any season, but this martini recipe is incredibly wonderful for autumn. This chocolate martini recipe by Grandbaby Cakes is actually for a mocktail, but she offers some wonderful suggestions for which types of alcohol or liqueurs to add if you want the full-strength version.

This cocktail gets its spice from chai tea, powdered cayenne, and cinnamon syrup. We like this cocktail paired with vanilla vodka and a little orange liqueur or triple sec. Pure yum!

If we could pick a trifecta of the best autumn desserts, it would include pumpkin pie, apple pie, and of course, pecan pie! We see pumpkin and apple covered so much in the world of cocktails, but we think it’s time to give pecan pie some love.

Pecan-flavored vodka, vanilla vodka, Irish cream, and heavy cream make the body of these cocktails. The rim of the glass that’s made from maple syrup, brown sugar, and crushed pecans takes it over the top. It tastes like the classic pie in a glass, but better!

by No Spoon Necessary

Let’s talk for a minute about pumpkin pie. It’s the dessert you’ll find on practically every Thanksgiving table, and it’s one of those treats that we only allow ourselves to enjoy at a certain time of year. This is that treasured pie in cocktail form, and it’s delicious.

To make this fall cocktail, you need spiced rum, pumpkin spice vodka, real pumpkin puree, half & half, maple syrup, and vanilla extract. If you like yours a little spicier, a dash of pumpkin pie spice on top is perfect. One sip of this pumpkin martini, and you’ll lose all interest in that pumpkin spice latte from the coffee shop.

Enjoy the Season with These Autumn Martini Recipes and More

What are your favorite autumn cocktail recipes? We love the taste of the seasonal martinis on this list, but there are also so many other great recipes to enjoy. In your quest for new drinks to enjoy, make sure to check back often for more seasonal cocktail ideas. 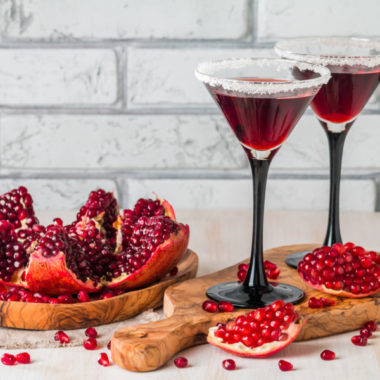 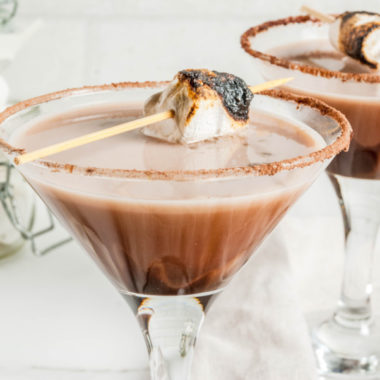