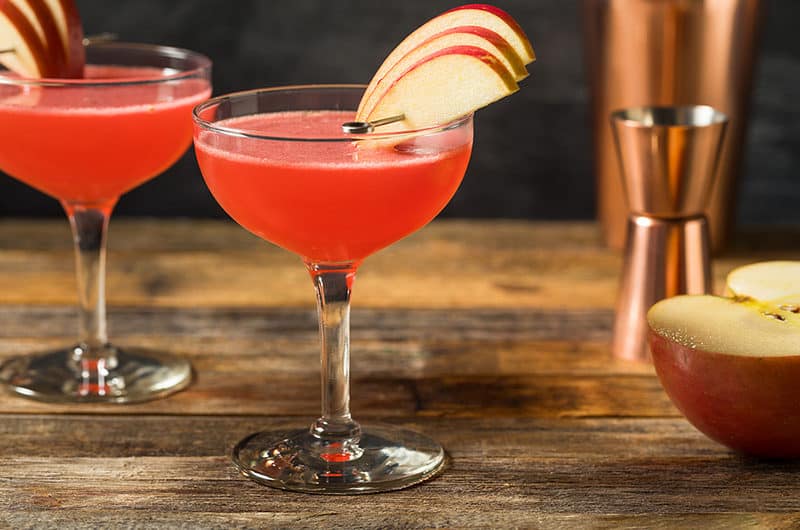 6 of the Best Red Apple Martinis

Martinis may have originated as gin and vermouth, but there are almost endless variations nowadays. Many now are made with vodka or other spirits and are flavored. Apple is a popular flavor that is often on a martini bar menu and makes for a great cocktail.

However, many of these are typically modeled after green apples, which are tart and sour. A red apple martini is a tasty alternative that is on the sweeter side. Let’s take a look at red apple martinis, garnishes, and six fantastic recipes.

What is a Red Apple Martini?

A red apple martini and a green apple martini can be made with several different spirits, and they both usually include sour apple pucker. However, recipes often add cranberry juice, apple juice, or both to get the apple taste.

No cocktail is complete without a garnish. Garnishes level up the presentation and make for a beautiful martini. For these flavors, of course, red apple slices are the best garnish. However, a lime wedge can do in a pinch. You could also just go for a coconut flake or sugared rim!

By Just A Pinch

Apple martinis can often be too sour, but this Perfect Red Apple Martini by Just A Pinch uses cranberry juice to trick the brain into thinking you’re tasting a red apple instead of a green one. This truly is the perfect red apple martini recipe between the cranberry juice, sour apple pucker, and the vodka spirit base.

By Love To Know

Love To Know has several apple martini recipes, but their Washington Red Apple Martini tastes just like a red delicious apple. It uses Canadian whisky at the base with additions of cranberry juice, red apple schnapps, and lime juice. It’s a beautiful red color and an even tastier drink.

This Red Apple Martini Cocktail by Fantabulosity is a festive drink that can be enjoyed any time of year. Combine vodka, red apple schnapps, and cranberry juice in a cocktail shaker with ice and strain into a chilled martini glass rimmed with some shredded coconut. You can even substitute plain vodka for apple vodka for an additional delicious flavor.

The Red Apple Cocktail by Difford’s Guide swaps out vodka for bourbon whiskey and mixes it with sour apple liqueur and cranberry juice. It is still the deep red color we love with all of the great apple flavors.

Food.com has created a Red Appletini recipe that is truly stunning. Simply mix Canadian whiskey, sour apple pucker, and cranberry juice in a cocktail shaker. Shake vigorously, strain, and serve in a chilled martini glass. This easy cocktail recipe is great with dinner or for drinks after work.

Though making a red apple martini is pretty simple, here are a few things to keep in mind to step up your bartending game just a notch.

There is always a debate on whether martinis are shaken or stirred.

Though it always comes down to personal preference, many people prefer them shaken because the ice in the cocktail shaker dilutes it just a bit. Just the touch of water that comes from the melting ice takes away the afterburn from the spirits and makes it go down a lot smoother.

It also chills it quicker without ice melting directly in your martini and watering it down too much while you drink it.

As you can tell from the six great recipes above, there are several base spirits that can be used in a red apple martini. If you are looking for a sweeter cocktail, go with plain vodka, as it has the most neutral flavor. Recipes with bourbon or Canadian whiskey will still have the apple taste but will be a bit stronger.

Additionally, with martinis, because they are alcohol forward, it is important to choose a middle to high-end spirit. Lower-end alcohol will have more of an aftertaste which doesn’t allow the fruity sweet taste to come through as much.

Many flavored martinis will have a rim that has been dipped in sugar or salt. However, with a red apple martini, if you are going to rim the glass, it is better to dip into fruit juice, simple syrup, or corn syrup, and then sugar or even shredded coconut. Going with the sugar preserves the sweetness of red apple martini recipes.

Red apple martinis are perfect for a holiday like Christmas because of the color or can even be a refreshing summer cocktail. They are quite versatile and definitely delicious. Choose one of these six great recipes and serve up a red apple martini! 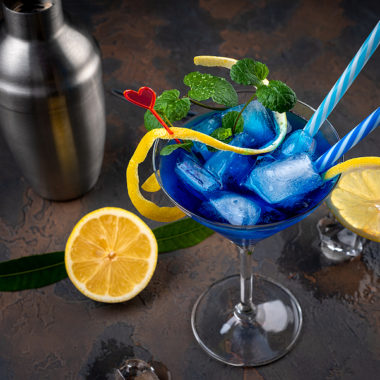 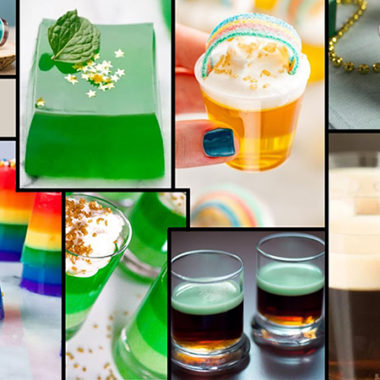