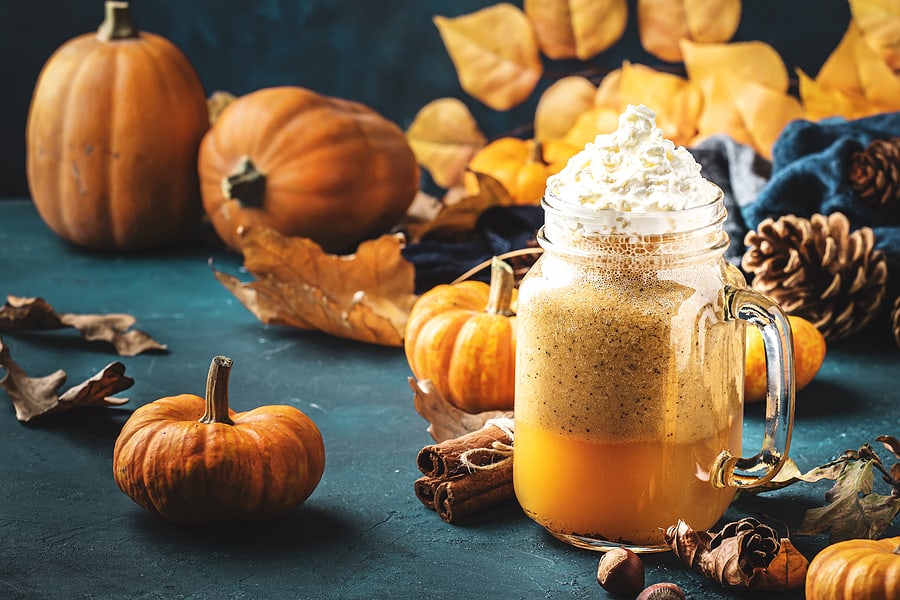 Nothing embodies the flavors of fall and winter-like pumpkin spice. It seems there’s pumpkin spice everything, but what about adding a little of this seasonal flavor to your favorite cocktails? Pumpkin spice rum drinks are a hot cocktail trend right now, and after sampling a few from our list of twenty favorites, we can see why.

You can get that great pumpkin spice flavor into your rum cocktails in a couple of different ways. There’s pumpkin spiced rum like Captain Morgan’s Jack O’Blast, or you can use pumpkin spiced syrup or spice blend. Some of these rum drinks use pureed pumpkin, while others skip and just go straight for the flavor. One thing is for sure. Your new favorite cocktail recipe is somewhere on this list.

This spiced pumpkin cocktail is refreshing and exactly what you need to put you in the holiday spirit. The base of the drink recipe is pumpkin spiced sparkling cider with spiced rum and a nice dash of bitters to add a little depth of character. Serve it over ice, garnished with a cinnamon stick. Perfection.

Hot buttered rum with the seasonal twist of pumpkin spice? We can think of a single reason not to indulge in this decadent spiced rum cocktail. This one takes a little time to prepare with a “batter” made from softened butter, pumpkin puree, brown sugar, and pumpkin pie spice mix. Add unsweetened tea and spiced dark rum for a creamy treat. Garnish with whipped bream and a sprinkling of nutmeg or cinnamon.

This pumpkin-spiced cocktail has just the right balance of sweet and creamy without going overboard. Made with pumpkin liqueur, spiced rum, and a touch of cream, this cocktail looks beautiful in a martini glass with a sugared cinnamon rim. Shake it over ice and pour for the perfect addition to your fall or winter cocktail party.

Once you taste this spiced pumpkin cocktail, you’ll realize that pumpkin spice drinks aren’t only for the Thanksgiving table. You’ll want this cravable martini anytime there’s a chill in the air. The secret ingredients in this perfect drink are pumpkin spice syrup, dark rum, Irish cream, and half and half. We love the deliciously spiced graham cracker rim with a hint of ground cinnamon.

If you’re looking for a cocktail that tastes just like pumpkin pie in a glass, this is the one you want to try. Spiced rum in the form of Captain Morgan or something similar combined with pumpkin pie filling, half and half, cinnamon, and nutmeg. This is thicker than some of the other cocktails on our list, making it a great dessert drink.

This is one of those drink recipes that will become a tradition at every gathering during the fall and winter months. Fresh ginger, cinnamon syrup, orange juice, lime juice, pumpkin butter, and bitters will make this delicious cocktail the life of the party. The ginger is muddled to release all of its flavors and juices and then topped with the combination of citrus and aged rum. Garnish with a bit of nutmeg for a finishing touch.

By One Sweet Mess

A classic old-fashioned is a perfect balance of flavors with citrus, booziness, and a bit of sweetness. This version is made with a double punch of pumpkin spice rum, and dark rum served in a glass with a few dashes of bitters, orange peel, and of course, a cherry. A traditional old-fashioned has granulated sugar, which this one doesn’t, but you could certainly add it if you like your pumpkin spiced drink a little sweet.

This warm pumpkin spice cocktail is a vegan version of a tasty rum drink that will be a hit at your next party (it’s also pretty good if you’re just hanging out at home, snuggled up on the sofa, too!).  This version uses a pumpkin spiced coconut milk, canned pumpkin, pumpkin spices, dark rum, and vegan whipped cream to top it off.

A flip cocktail, by today’s standards, contains egg, sugar, and some boozy goodness. The result is a frothy cocktail that is as delightful to look at and admire as it is to sip. This seasonal flip cocktail uses pumpkin puree, aged rum, and honey spiced syrup in addition to an egg white. Don’t worry; there’s also a recipe for the honey spiced syrup if you can’t find any locally. Pro tip: the syrup is also great in your morning coffee or tea.

A traditional dark & stormy cocktail combines ginger beer, dark rum, and a hint of lime. This version is among the new recipes we found that take a classic drink and transform it into one you won’t forget. This one uses pumpkin butter instead of pureed pumpkin, plus spiced rum, orange juice, and ginger beer. You can use ginger ale instead of ginger beer in this recipe, but it won’t have the same “punch.”

It’s not too far off base to credit Captain Morgan’s Jack O’Blast pumpkin spice rum with the trend toward pumpkin spiced cocktails. This cocktail is about as simple as it gets. Take a bottle of Jack O’Blast, start pouring it into generous shot glasses, then top with a layer of whipped cream. You can create a smooth layered look instead of the usual swirl by pouring the whipped cream over the back of a spoon.

By Eat This, Not That

Worried that you won’t be able to enjoy the cocktails of the season while staying true to your keto lifestyle? No need to worry. You won’t miss a thing with this Keto Pumpkin Spiced Cocktail. This drink combines rum, pumpkin, pumpkin pie spice, and a touch of stevia for keto-friendly sweetness. Serve with a garnish of cinnamon and star anise for a nice extra touch.

Coffee shop PSL drinks just won’t compare once you’ve sipped on this adult version. Fill a cup with your favorite espresso, chocolate sauce, and Jack O’Blast pumpkin spice rum. Then stir in some steamed milk. This will easily become one of your favorite recipes for a pumpkin spiced treat.

By The Purple Pumpkin Blog

Pumpkin season is here, so why not have a little fun and try this new cocktail recipe for a spiked seasonal punch? We like that this recipe steps away from a traditional punch with the use of pureed pumpkin, spiced rum, spiced apple cider, and cream soda for the necessary fizz. Garnish with a heaping pile of whipping cream and a sprinkle of pumpkin pie spices. Yum!

By Cup Cakes and Cutlery

Is it time to step up your Moscow Mule game? This spiced version using Captain Morgan Jack O’Blast is guaranteed to be a crowd pleaser. All you need for this recipe is three simple ingredients: Jack O’Blast pumpkin spiced rum, ginger beer, and fresh lime juice. Stir it up and enjoy!

There’s so much fun spiciness in this recipe that you’ll want to share it with all of your family and friends. Combine spiced rum with a sparkling hard cider. The natural inclination is to use a hard apple cider here, but you can always get creative and play around with other flavors. Pumpkin spice syrup and a few drops of your favorite bitter will have this drink on your personal list of favorites.

We love drinks that you can mix together easily with simple ingredients but also taste like they are the art of a professional mixologist. The Apple Jack-O clicks off all of those boxes. It’s a simple cocktail full of flavor with chilled apple cider, Jack O’Blast pumpkin spiced rum, and a cinnamon stick as a garnish. Stir and serve. It’s that easy.

Alexander cocktails are cool, creamy drinks, sometimes made with heavy cream, other times with ice cream and prepared in a blender. This decadent drink uses Gosling’s Black Seal Rum, pumpkin spice simple syrup, and heavy cream. Shake it up in a cocktail shaker and serve. For a frozen treat, add vanilla ice cream instead and give it a twirl in the blender.

Most of the drinks on this list use dark or spiced rum, but this one is lighter and a bit different. White rum is combined with lime juice and pumpkin spice simple syrup. The balance between lime and pumpkin-y spiced deliciousness is delicate and perfect.

By In the Kitch

This punchy cocktail is great to mix up for a crowd that loves the flavor of pumpkin spice. Pumpkin puree is combined with honey, orange juice, pineapple juice, spiced rum, orange liqueur, and fruit to garnish. Serve it alongside some of your favorite fall and winter-themed food at your next cocktail party.

Don’t let pumpkin spice season pass you by and miss the chance to sip on one of these twenty delicious rum cocktails. They’re guaranteed to warm your spirit and tantalize your taste buds every time. 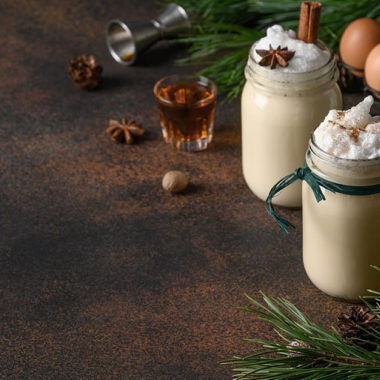