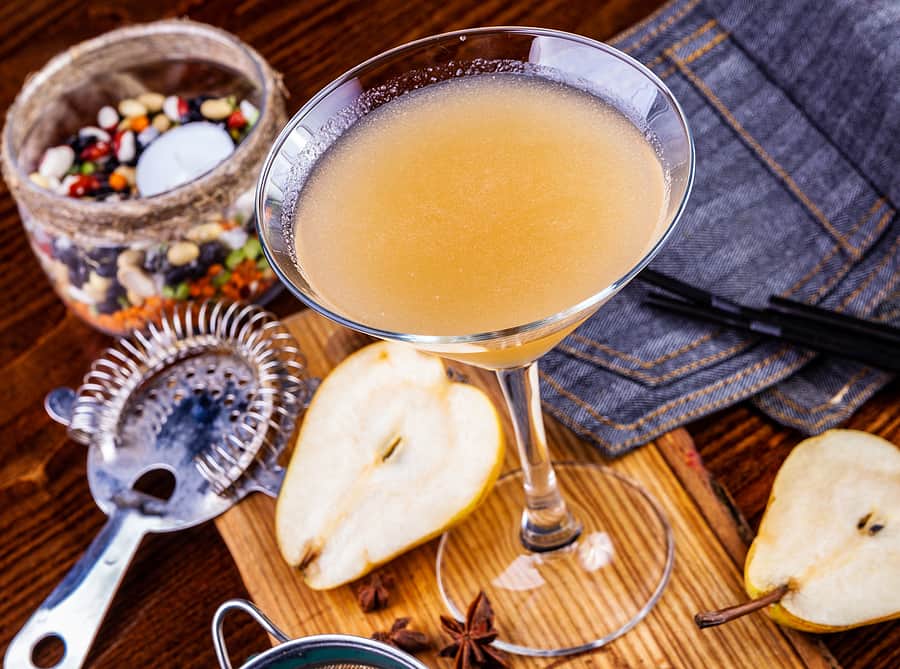 Pear martinis with vodka are quickly becoming a favorite because it is light, refreshing, and pairs well with a variety of herbs and other flavors.

Let’s look at what is in a vodka pear martini and twelve of the best recipes. You are sure to find a new favorite cocktail!

What Is In a Pear Vodka Martini?

Of course, like all cocktails, a pear vodka martini can be made in several ways, but the most basic ingredients include pear vodka, simple syrup, and fresh lemon juice. They are often served in a chilled martini glass and garnished with a pear slice or a lemon twist, but the presentation is really up to you!

Ready to dive into a great pear martini recipe? Here are twelve of the best!

This pear martini by Kitchen Swagger elevates a traditional pear martini recipe with the addition of elderflower liqueur. Combine Grey Goose La Poire with elderflower liqueur, fresh lemon juice, and simple syrup into a cocktail shaker filled with ice cubes, shake vigorously, and strain into a chilled martini glass. You’ll love this simple yet refreshing martini because it is not too sweet!

By Pass the Sushi

Pass the Sushi has a great recipe for a pear martini. They combine sweet pear vodka with Grand Marnier, which is an orange liqueur, and pear nectar to make this cocktail. The addition of the Grand Marnier gives the cocktail a zesty bite while balancing it out with pear nectar instead of simple syrup to pack in the pear flavor.

By Walking on Travels

The Autumn Pear Martini cocktail recipe by Walking on Travels uses pear puree, which is peeled and chopped pear blended in a food processor. This addition of fresh pears really amps up the pear flavor.

The rest of the cocktail recipe is more traditional and contains pear vodka, simple syrup, and fresh lemon juice. As a bonus, Walking on Travels also has a great pear cosmopolitan recipe.

By Inspired by Charm

Inspired by Charm has developed an excellent pear martini recipe that includes pear-flavored vodka, St. Germain liqueur which is an elderflower liqueur, freshly squeezed lemon juice, and a dash of angostura bitters. This martini is stellar with a perfect crisp pear taste, the bite of the lemon juice and bitters, and mellowed out by St. Germain.

By Garnish with Lemon

If you love a quick, easy recipe that doesn’t take too many ingredients, you’ll swoon over this Easy Pear Martini recipe by Garnish with Lemon.

You only need ginger liqueur, simple syrup, Absolut Pears, and lemon juice. Put it all into your cocktail shaker with ice, strain into a chilled martini glass, and you’ll have a simple yet tasty pear martini.

By Home and Plate

Elderflower is such a popular pairing with pear flavor because it adds depth to the pear flavor and makes it taste like fresh fruit versus artificially flavored. This Elderflower Peartini by Home and Plate is simple, using pear-flavored vodka, elderflower liqueur, pear juice, and a bit of key lime juice.

Zesty flavors pair perfectly with pear which is why this Minty Pear Martini recipe by Skinny MS is one of the best. Combine vodka, pear juice, freshly torn mint leaves, and lime juice into a cocktail shaker, strain into a glass, and enjoy! If you want a garnish, try using some fresh pear slices.

Home Wet Bar has put a sparkling twist on its Best Pear Martini recipe. They use pear-flavored vodka, muddled fresh pear, lime juice, sugar, and angostura bitters in the base of the drink, and then after it is shaken, they add sparkling mineral water to top it off. The sparkling mineral water gives it just a bit of spritz that brings out the other flavors beautifully.

This recipe takes a bit more time to make but is definitely worth it. The Spiced Pear Martini by I’m Bored, Let’s Go starts with making spiced pear vodka using vodka, sliced pears, cinnamon sticks, ginger, and whole cloves. Once that has been infused for about a week, it is combined with ginger liqueur, white cranberry juice, and lemon juice to make a fabulous spiced pear martini that is perfect, especially for fall.

The Original Daphne Martini by The Spruce Eats is a fantastic choice if you love a fruity, sweet but boozy martini. This pear martini recipe combines gin, pear flavored vodka, blue curacao liqueur, dry vermouth, and orange bitters to make a tasty cocktail that you may only need one of. After all, almost every ingredient contains alcohol, so this one can sneak up on you!

Absolut Pears is a fantastic pear-flavored vodka that has come up with its own pear martini recipe. The Absolut Pears Martini by Absolut Drinks contains the Absolut Pears vodka, simple syrup, lemon juice, and pear puree. It is easy to make as all you have to do is shake it up, strain, and enjoy!

Here are the most frequently asked questions about pear martinis.

What is the best pear vodka?

Though it is up to personal preference, Grey Goose La Poire is often considered the best pear-flavored vodka.

How many calories are in a pear martini?

The calories in a pear martini vary depending on the ingredients used, but it ranges from about 70-200 calories.

Head to the grocery store and get everything you need for a pear martini cocktail recipe. Follow one of these twelve fantastic recipes, shake vigorously and enjoy the balanced flavor. You are sure to have an amazing night. 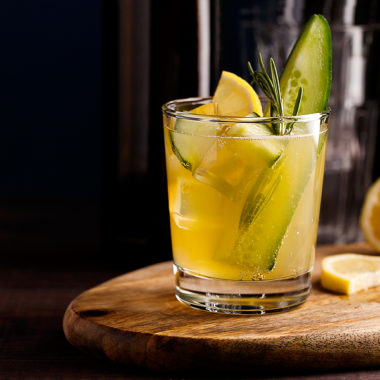 What is a Craft Cocktail? 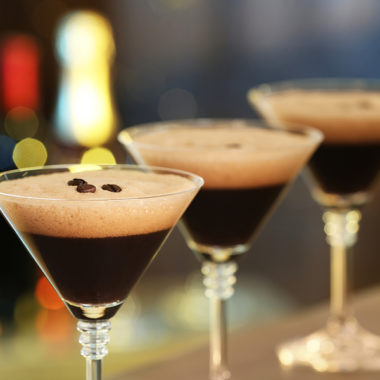 21 Flavored Vodka Martini Recipes (That Are Easy to Make)